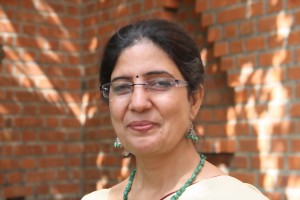 Acknowledged as a capable school leader with a proven track record Ms Hemalatha Pande’s sincere and hospitable nature has earned her the trust of her talented team of teachers and well as the school management when she took over the day to day administration of the Deens Academy Gunjur School when it was newly established in 2015. During this tenure Deens Academy Gunjur was rated “Best Upcoming CBSE school”, by Education World.

Ms Hemlata Pande has been associated with the Deens Group of Institutions since its inception and has worked closely with the founding team of The Deens academy in developing and implementing the Individual Learning Program (ILP) for the school. She began her career as a Primary school teacher and quickly rose to become a Section head and Head mistress of the school. She has officiated the role of Head Mistress firstly at the Primary Section of  Whitefield campus before moving to  Gunjur campus in a similar role during its inception. She is a resource person for Mathematics and has taught this subject for various grades, both Middle and Senior school.

A rank- holder in Bachelor Degree in Education. from Bangalore University, she also holds Masters degree in Science. She has completed her International Diploma for Teachers and Trainers from Cambridge University with distinction. She has also attended a Heads Leadership and Management Programme (HeadLamp) conducted by the Teacher Foundation (TTF).

She is a linguist and can speak and understand various languages. She has completed a certificate course in multimedia from San Diego Community College, USA, Certificate courses in French language from Quebec, Canada and FAES graduate school, Maryland, USA. She has also completed a Mandarin language course from Mandarin House, Shanghai, China.

Ms Hemalatha Pande has constantly worked at upgrading both her personal skills and those of her team in the fields of educational research and evolving new teaching methodologies. Her approach towards teaching is concisely expressed in the words of George Evans –

‘Every student can learn, just not on the same day, or the same way.’